The Bishop of Southwark celebrated the Eucharist, there was a fun run, lunch on the green, ballons, a cricket match and tea. 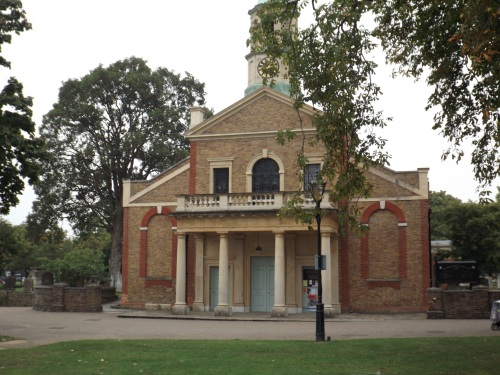 The porch of St Anne’s on Kew Green

The pretty church on the grass was sanctioned by Queen Anne and completed in the year of her death 1714. From then its long history was dominated by the Hanoverians so the building has many Royal reminders. The Old Duke of Cambridge used to heckle the clergy in a good humoured manner which was not appreciated by a curate.

Outside in the small churchyard are the tombs or artists Gainsborough and Zoffany.

The best souvenir of the 300th anniversary is the very fine paperback by David Blomfield called St Anne’s Kew 1714-2014. It’s very readable and the author is an authority on Kew Gardens and Richmond history.

This illustrated history gives a very interesting view of the evolution not only of the churchmanship but also local government. After the First World War the elected vestry become a parochial church council as it transferred basic community health and welfare matters to the borough council.

The most surprising change in the 21st century is the finding that although church attendance has risen to well over 200 on a Sunday morning there has been a sudden drop in weddings and funerals. The former of course can now take place in secular venues including imposing Cambridge Cottage opposite the church.

Tour of Church
On Saturday 25 October David Blomfield is leading a tour around the church and graveyard starting at 2.30pm. Tea and cakes will be available afterwards -St Anne’s has a long tradition of serving teas during the cricket matches on the green. This is a free event but those intending to be there should book in advance by emailing: [email protected]

This entry was posted in Uncategorized. Bookmark the permalink.