Peter Lea-Cox launched the series at the church on Thursday 11 November 1976 at St Mary-at-Hill.

The Bach Vespers series, once at St Anne & St Agnes Lutheran Church, has completed a full cycle of all Bach’s church cantatas.

Two cantatas for Advent will be heard at the anniversary concert at St Mary-at-Hill at 1.05pm on Friday 11 November .

Admission free; followed by a reception.

The annual Fish Harvest at St Mary-at-Hill is at 11am on Sunday 9 October.

All Saints in Margaret Street W1 is one of the few churches keeping the Assumption of the Blessed Virgin Mary on Monday 15 August, the right day rather than the more convenient Sunday.

Solemn Mass is at 6.30pm on Monday followed by outdoor procession to and from nearby Oxford Street with choir, brass & drum and the statue of Our Lady of Walsingham.

All Hallows by the Tower, advertising itself as ‘the oldest church in the City of London’, has a new website.

It has just been confirmed that the Bishop of London will be at the church  for its patronal festival on Sunday 30 October.

The ashes of The Revd John Gaskell, former Vicar of St Alban’s Holborn who died last October at the age of 87, are being buried at Brookwood on Saturday 4 June.

Fr Gaskell was known beyond Holborn as a noted preacher. “The best preacher I know is John Gaskell,” said John Betjeman. Princess Margaret called him her favourite preacher whilst religious affairs commentator Melanie McDonagh said his sermons “were delightful”. In 1992 the Evening Standard gave him a three star rating. Broadcaster and priest Richard Coles says he was “one of the finest preachers in the Church of England”.

As a teenager Gaskell had been greatly inspired by his local church St Lawrence Whitchurch at Little Stanmore in north London which he recalled first entering “unbaptised, utterly ignorant, totally uninformed”. The church, in a suburban road, was rebuilt in 1715 with a continental baroque interior and maintained an Anglo-Catholic tradition in sympathy with its decoration.

He graduated from Jesus College Oxford, where he enjoyed rowing, and joined Royal Insurance. Suddenly, at the age of 31 and to the disappointment of his atheist parents, he went to Chichester Theological College where he admired its principal Cheslyn Jones. John Gaskell was ordained priest in 1961 when a curate at St James’s, Elmers End in Beckenham. But it was the second curacy served at All Saints Margaret Street in central London which had the greatest effect on his ministry. It has been called the ‘cathedral of Anglo-Catholicism’ due its revolutionary Butterfield architecture and high standard of liturgy. When he arrived in 1964 it still had a choir school.

After four years be became Chaplain to the Grosvenor Chapel in Mayfair. He recalled the congregation bringing their dinner bells to ring at the Easter Vigil. In Mayfair he was also warden of Liddon House. Canon Henry Liddon had wanted to be Vicar of St Alban’s Holborn but that was the appointment offered a century later in 1979 to John Gaskell.

At the time it had a rather exclusive congregation but soon he made it a church for everyone including single mothers whose children attended the school, gay people and pensioners with long memories of the church as the centre of the community behind the red Prudential building. He loved Leather Lane market and was just at home in Gray’s Inn which also fell within the parish.

On Sunday there was a Sung Mass followed by the Solemn Mass with a professional choir under composer Michael Fleming and an evening Mass. He made it both an authentic parish church as well as a shrine to refresh those ministering and worshipping far away in less inspiring churches. One who dropped in and found faith there was Richard Coles who recalls the vicar as “a remarkable priest in his sixties – tall beaky and quite bald, in a black cassock…”. Coles has described Solemn Mass on that Sunday in 1990: “It was Panavision, it was Grand Opera, it was as odoriferous as Christmas, sound and colour and smell and scale conjuring a sacredness and mystery that was both both awe-inspiring and moving.”

An early challenge for Gaskell was ministering to victims of Aids at a time when the virus was a mystery giving rise to fear. St Alban’s briefly experienced a large number of funerals for unmarried men including the church warden.

He was a friend and admirer of Archbishop Michael Ramsey who in retirement, to the amazement of many, came to stay at Holborn and presided over the crowning of the May Queen in church. In 1985 Bishop of London Graham Leonard made John Gaskell a Prebendary of St Paul’s. The only time he appeared slightly apprehensive before a sermon was on Sunday 5 July 1992. This was when he preached about the early church agreeing to admit Gentiles. It was, he suggested, the equivalent to accepting that priests might not always be men. The congregation did not seem ready to agree but only a third signed the Forward in Faith petition promoted by opponents.

John Gaskell was the first chair of Affirming Catholicism which was founded at St Albans. “‘Are you sound?’ has become as unhealthy a Christian question as ‘Are you saved’,” he said. “If we are going to have women priests in the Church of England I want them to be Catholic ladies, not liberal Evangelicals.” They needed to be accepted as ‘properly ordained’ and therefore seen to have been anointed.

Early in 1993, during the debate following the General Synod vote to ordain women, he said: “I regard myself as a very deeply traditional Christian. I always have been, never been anything else, except during periods of unbelief and the current time is not one of them. I believe it is perfectly possible for a traditionalist to understand that God is moving his church forward to something he has not asked us to do before.”

By the time he retired in 1993 he had presided over the opening of the St Alban’s Centre, an award-winning church hall with a glass cloister which he conceived and had built alongside social housing. But less planning was made for his own future. He first moved to a tiny flat on a noisy main road in Earls Court. This may not have mattered for he was so tired that he slept for most of the first three months. Soon after he lived on an island in the the River Thames but this proved an unhappy period. He was rescued in 2002 by his old church All Saints Margaret Street which offered him a flat just off Oxford Street and a welcome place in the clergy team. It was also handy for the opera.

In 1999, with the encouragement of Jeffrey John, he had published A Rule of Life. Gaskell’s hidden ministry continued in the confessional and with spiritual direction for many beleaguered clergy.

In 2005 Archbishop Rowan Williams awarded him the Cross of St Augustine. Two years later he moved to Morden College in Blackheath where he soon came to feel enough part of the community to direct that his funeral should be there before the long-booked interment in the St Alban’s Holborn burial ground in Surrey. 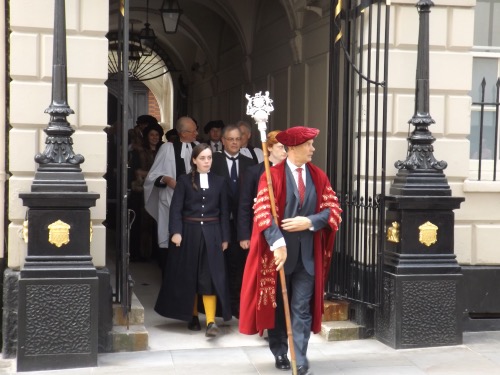 The Skinners Company in the City of London has been organising a procession on Corpus Christi since 1393. After Elizabeth I came to the throne the annual procession continued but the Blessed Sacrament is not carried. Today’s procession from Skinners’ Hall on Dowgate Street was to St James Garlickhythe for the church service. 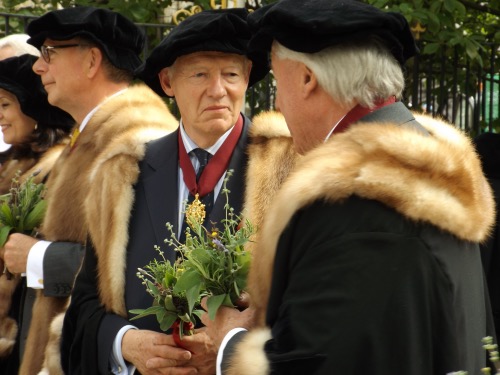 The relic of St Thomas Becket, brought from Hungary, can be seen at St Margaret’s Church Westminster today (Thursday) until 3.30pm and tomorrow Friday 27 May from 9.30am to 2pm. 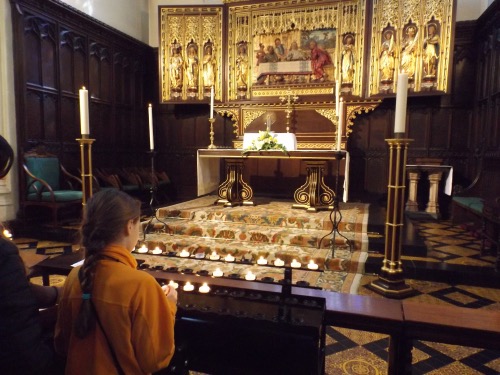 St Thomas of Canterbury relic at St Magnus in London

A relic of St Thomas Becket, a fragment of elbow, has come from Esztergom in Hungary for a week.

Having been received at Westmister Cathedral today, the precious relic goes to Westminster Abbey tomorrow.

On Wednesday afternoon 25 May the relic moves to St Magnus the Martyr Church in the City of London where it will be displayed alongside the church’s own relic.

The arrival is at 3pm followed later by Solemn Vespers sung to the setting by Johann Baptist Schiedermayer (1779 – 1840).

St Magnus looked after the St Thomas Chapel which was in the middle of London Bridge.

St Thomas was born in the City and as Archbishop visited Southwark Cathedral at London Bridge’s south end just weeks before his murder.

Later this week the relic journey ends at Canterbury.

The art exhibition opens on Monday and includes a painting by Keith Noble of the South Bank trees about to be obliterated by the garden bridge.

The Festival Mass is at 11am on Sunday 12 June. The setting is Mozart’s Coronation Mass.

Methodist minister Ronald Gibbons, who master-minded the re-opening of Wesley’s Chapel and raised its profile as the cathedral of Methodism, died last year at the age of 92.

His son-in-law has wriiten a tribute in The Guardian.